For my February in Japan I didn’t leave Aichi, but I did experience some interesting things. Since I live near Osu Kannon, I always see something crazy every few days. Somedays I see camera crews recording people eating at different restaurants there. They always draw a big crowd. Every weekend I will see a boy or girl band having a street performance. Sometimes they are. . . not so good. . .in my opinion. . . but they still draw a big crowd. However, it is very fun to watch their concert because the crowd interacts with the band. They will chant along or wave their hands and sing along to the random band. Once I saw Japanese Captain Jack Sparrow (he was in cosplay) wandering around Osu Kannon on his pirate ship (his bike), I gave him a thumbs up and he yelled, “Hello,” to me. I still don’t know why he was in cosplay, there wasn’t an event or anything and he was the only one wearing a costume. Maybe he just likes to be a pirate, who knows? Osu has a lot of crazy things you can see on any given day. 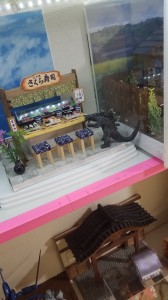 I saw this at a shop, now I know why Godzilla always attacks Japan, he just wants to get some sushi! 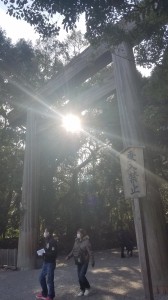 A picture I took when I went to Atsuta Jingu.

In class we have been doing a lesson about ostriches which has led to me learning a lot of random facts about ostriches. For example, I now know that an ostrich can roar like a lion and its eyes are bigger than its brain. I realized that ostrich sounds like Austin to many of my students. So, when they were assigned to research some ostrich facts for their homework, some of them said, “Austin facts???” When Lesley showed her ostrich egg to each class, every class had at least one or two students that exclaimed, “AUSTIN EGG?!?!?!?” Assuring students that I do not lay eggs was a hilarious experience.

I finally experienced the classic Japanese hobby of karaoke with my roommates. We went to a Joy Joy near my share house, and it seemed like the building used to be a church because inside it was decorated so fancy.  It was very ornate and over the top. I never expected a karaoke place to have a chandelier. I didn’t get to sing like crazy because I wanted to keep my voice in good condition, since I need it for work. Even with that, it was a lot of fun. The music videos were so funny to watch; they were so corny. Seeing Japanese people at karaoke is one thing everyone should do at least one time in their life. Japanese people transform in a karaoke box, they cut loose and get passionate while they sing. Overall, just seeing that was worth the price alone. 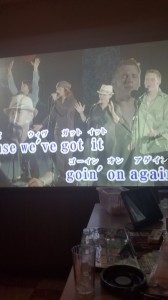 Karaoke has some funny music videos. 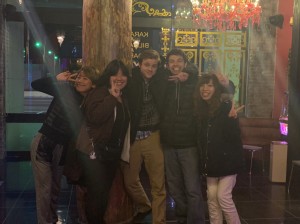 Fun times with my roommates.