This month we had the JET test, so we had a few classes where we had to change the normal routine and add in some test preparation. This allowed me to create my own lesson for a few of the classes.

The lesson I made was about solving English riddles. In English, many words with multiple meanings are pronounced the same as another word. My goal was to make the students think about this after the lesson. In English literature there are often hidden meanings. One thing may literally mean something but the real meaning was hidden behind a clever use of words. Other skills needed for this activity were problem solving and teamwork.

The class was split into groups for the students to work with to solve the riddle. Some riddles were solved quickly while others took a lot of discussion. I didn’t help the students for the first few minutes of the discussions because I wanted them to think of possible answers. Even the wrong answers the students said had some good reasoning behind it. The explanation of their answers allowed them the opportunity to explain their logic in English. Also, I think the students explanations helped the other students understand it better.

After the time was up, I would ask each team what their guess was. If any team got it correct, I would have that team explain the answer to the rest of the class. If no team was correct, I would give them a hint and then allow the whole class an additional 30-60 seconds to discuss it together before I told them the real answer and explained it to them. Usually after finding out the answer I would hear a chorus of, “Eeehhhhhhhhh!!!!!!!!!!!” as the students realized the answer.

Overall the lesson was successful and I felt that the students learned some good skills from it and had fun. The riddle that the students seemed to like the most was “Why was 6 afraid of 7?”. It was hard for them to imagine a reason deeper than “Because 7 is bigger than 6”. After I explained to them it was because, “7 8 9 = 7 ate 9” they all understood that they would have to be creative and think outside of the box to solve the problems. The most rewarding part of the lesson to me was I felt like I could see the gears turning in their heads as they put it all together for their eureka moment. 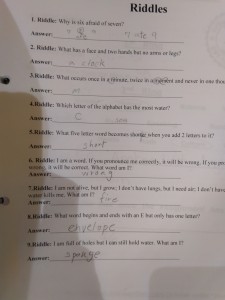