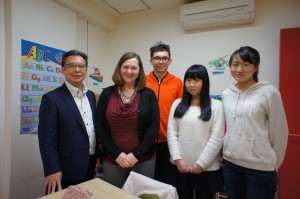 Ten years ago, my husband and I opened up BIG BOW English Lab. One of our first students was a little girl who had come back to Japan after living in Los Angeles for a few years. Her parents told me that she had already forgotten all of the English she had learned while living in the USA. However, soon after, I began to realize that wasn't the case. After about a year in class, it was almost as if her English had been hibernating someplace in her brain and was now in the process of waking up. I became very interested in learning more about how young children learn languages and the needs of returnee students because of her. It was very interesting to watch her English skills improve even more as she grew up and became a member of our Super High School Class.

Last Thursday was a little bittersweet, as it was the last Super High School class. I'll never forget these amazing students and I wish them the best of luck!