名古屋市昭和区の英会話スクールBigBowEnglishLab > ブログ > Flying with a message around the world

Yesterday, Mr. Ito and I had an amazing opportunity to see the Solar Impulse 2 at Komaki airport in Nagoya, thanks to Theresa Kannenberg of TLC English Center, who invited BIG BOW to participate in an event along with Mami Virtue of Kiddy Cat English school. 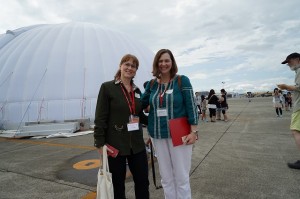 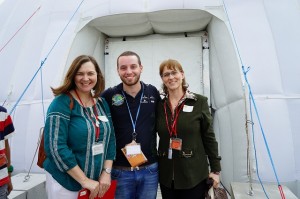 The Solar Impulse 2 is an airplane that runs only on solar energy. It left Abu Dhabi on March 9th, 2015 in an attempt to fly around the world. The airplane must complete its journey by the autumnal equinox, because after that the days will become too short in the Western Hemisphere to provide enough sunlight. The battery on this airplane is really incredible – once it is charged during the day, it can fly all night! 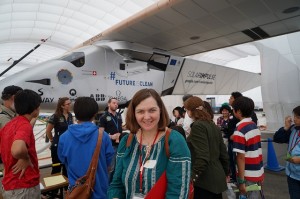 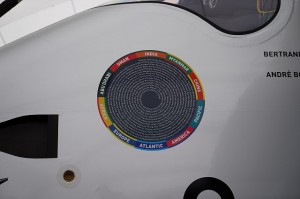 Other interesting facts about the Solar Impulse 2:

*Only one pilot can fly at a time.

*It weighs about as much as a car.

*During the day, it can fly almost as high as a commercial airplane.

* One of the pilots, Bertrand Piccard, was the first person (along with Brian Jones) to fly around the world in a balloon!

The Solar Impulse 2 was on its way to Hawaii when it had to make an unscheduled stop in Nagoya, due to bad weather. The wing was damaged when it landed. At this moment, it is on the tarmac of Komaki airport in a temporary inflatable hangar, waiting for sunny weather so it can take off again. We were able to go inside the hangar and see this incredible airplane for ourselves. 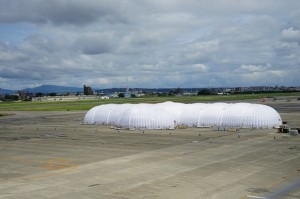 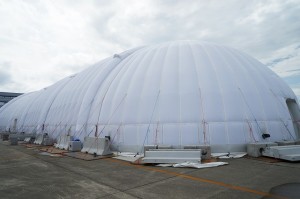 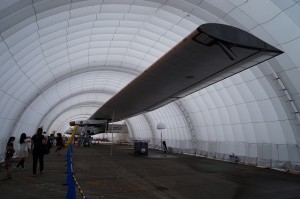 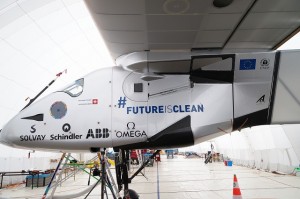 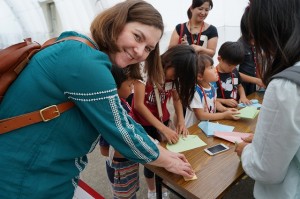 Our tour guide was Daniel Cohen. One of the more memorable things he had to say was, “This was not created to transport people; it was created to transport a message.” The message is that solar energy’s time has come and clean and sustainable energy can and will become more and more a part of our daily lives. 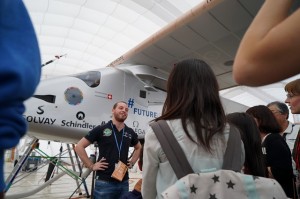 I think Mr. Cohen’s message is very profound. Some may focus on the fact that the Solar Impulse 2 can only transport one person or may not finish its goal to fly around the world in a year. However, keep in mind that the Wright Brothers encountered many delays and setbacks in trying to develop and fly the first airplane. When they finally were successful, it was in the air for just 12 seconds.

But after that first short flight, it only took sixty-six years for the first man to land on the moon!

This morning, I saw on Twitter that the Solar Impulse 2 is set to take off for Hawaii tomorrow morning. 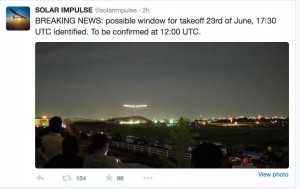 If you’d like to learn more about the Solar Impulse 2 project and follow it on its journey around the world, please go to www.solarimpulse.com or check out #FUTUREISCLEAN

I can’t wait to teach the BIG BOW students about this solar airplane’s historic flight and am working on some materials now that I plan on sharing with other teachers in Japan and around the world. 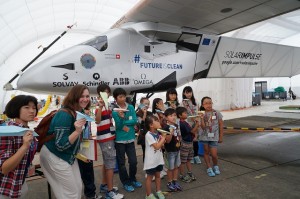