For the winter holidays I went to Osaka and Kyoto. In Osaka I finally got to meet a friend and penpal I’ve known for years. We haven’t talked in person since university, so it was really fun to see her again and meet some of her friends. When I went to Osaka Castle I met a very friendly Japanese man who thought I looked like Leonardo DiCaprio; he even asked for my picture! Overall, Osaka is a really fun city and I definitely need to go back in order to see everything it has to offer. 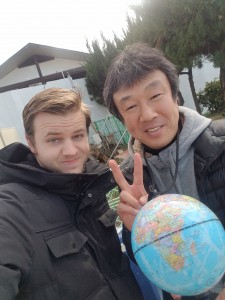 For New Year’s I went to Kyoto. I thought that if most Japanese people go to a shrine for New Years, that I would go to the city famous for shrines. Kyoto is very pretty and you can find lots of places to take great pictures without even trying. During the trip I went to many shrines. My favorite shrines were Inari Fushimi and Sanjusangendo Temple. 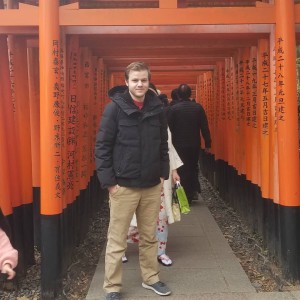 On New Year’s Eve my hostel served soba to everyone staying there.   Then I went to the Yasaka Shrine for the countdown. It was very confusing, I stood in a huge crowd of people on the street for around an hour. Everyone got their smart phones out for the countdown so I thought something would happen, but then nothing happened, and we kept standing there. Two Japanese girls helped explain to me that we were waiting for the line to move to go and pray at the temple. They taught me how to properly pray. Unfortunately, I didn’t have a 5-yen coin. I didn’t want to give the shrine less than 5 yen so I gave it 50 yen. So, I think I will have ten times better luck! 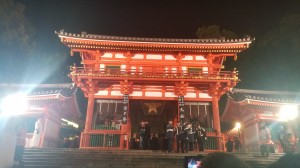 I got two fortunes. The one in English that said I will build a house - that was confusing for me! Another I found inside a New Year’s Boar I bought for a souvenir. It was in Japanese, so I asked my friends what it said. They all said it was the best one, so it seems wishing with 50 yen paid off! 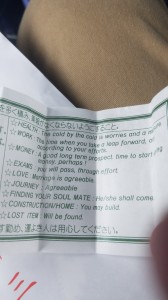 I will have to come back to Kyoto as well, especially for cherry blossom season. 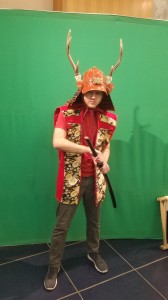 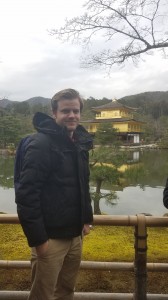