名古屋市昭和区の英会話スクールBigBowEnglishLab > ブログ > Back on my feet again!

Sometimes I sit and think about everything that I am thankful for. However, being able to walk is not usually one of the things that come to mind! I will never take it for granted again.

At the beginning of June, I slipped on a slope at a campsite at night and fell down. At first, I thought I only sprained my ankle. I was in for a shock when I saw on the X-ray that I had broken my fibula, the narrow bone on my lower leg.

After my operation and a short hospital stay, I had to think about how to live my life during my recovery. There wasn't enough room to use a wheelchair in the house and school, so I learned how to walk using an iWalk. iWalks are rare in Japan (even though a famous Japanese baseball player posted a video of him using one on Twitter), so I got a lot of stares and comments from people around me. Some students said I looked like a pirate using a peg leg! 😅

I tried not to let my broken leg slow me down. I even made it to the beach! 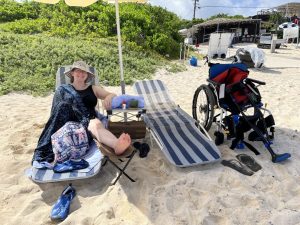 After six weeks, I had to start putting weight on my injured leg. Regular crutches were really hard to use, so Mr. Ito bought me some "Canadian crutches". Once I got used to those, my rehabilitation went very smoothly. I was even able to go up and down the stairs of Kegonji Temple. That temple has an area where you dip a piece of paper with a prayer on it into water and then stick onto a statue to heal that part of your body. A few days after that, I was able to stop using the crutches and walk on my own. 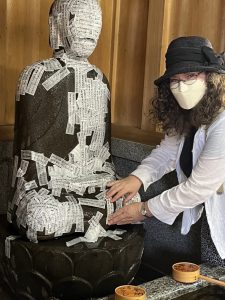 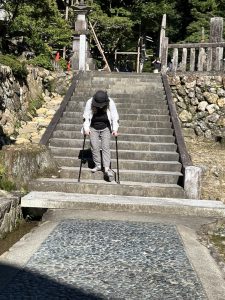 My leg is still not back to normal. I can easily walk 10,000 steps or ride my bicycle all over the city, but my foot is too swollen to wear anything but sneakers. Going up stairs is easy to do, but going down them can be a challenge. My doctor says all of this is normal and I should be better soon. When I had my operation, they put a titanium plate and few screws into my bone, which will have to be removed next summer. This experience has made me a much more patient person.

This experience has also made me very thankful for my students, and especially Michael-sensei. With everyone's help, we were able to continue classes normally. I was very touched by everyone's kindness, especially when a parent brought me a special amulet from a shrine for people who had injured their legs! 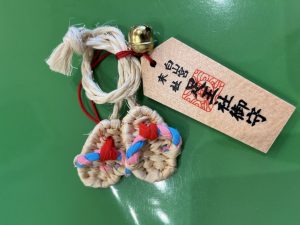