名古屋市昭和区の英会話スクールBigBowEnglishLab > ブログ > What is your default setting?

In computer science, a default setting means the settings your computer comes with. You can change them if you wish, but those settings are the same for all computers that are sold. In everyday life, default settings can refer to a habit or old way of acting or thinking. There’s really nothing wrong with default settings, after all, you have to start somewhere. However, many problems are caused when it is assumed that default settings work for everyone.

Some of them are big problems, such as women dying in car crashes because safety tests are based on measurements for a man’s body. Some are smaller, such as a soap dispenser that works with people who have light skin, but cannot detect enough reflected light when someone with dark skin tries to use it. To quote the article about the soap dispenser, “Technology is used by everyone so it should be a reflection of everyone. If it doesn't do that, it doesn't work as well as it could.”

I often thought about “default settings” when I was studying and doing research for my MSc. Despite the fact that most educators know that children do not learn the same way adults do, it often seems that materials or programs are based on what is assumed for adults. Of course, the reason is probably due to the fact that most research on English teaching is done on adult students. For example, most extensive reading programs come with the assumption that the students can already read in English at a basic level, while many children learning English may still be at the beginning stage of reading.

We also must never assume a program designed with adults in mind will work for children. I remember many years ago talking to a young boy who loved to read English books. He told me that his mother made him participate in an extensive reading campaign that was popular at the time with adults. As part of the campaign, people would write down all the books they had read in a special campaign booklet and keep a running tally of how many words were in each book to try a reach a word target. He confessed that he hated the campaign. I was very surprised and remarked, “But you love reading! Why don’t you like doing this?” He replied, “The math is too hard!” As he had just learned addition in school, he found adding up the number of words read for each book and writing them in the campaign booklet too onerous.

A final “default setting” I’d like to discuss is the prevalence of male superheroes and male main characters. There is a widespread belief that everyone has less interest in reading about female superheroes and that boys would not be interested in reading a book with a heroine as the main character. At least in my classroom, this has been proven wrong. The Vera the Alien Hunter graphic novels, designed for young EFL students, has been a huge hit with boys and girls alike in my classroom library. In fact, I’ve had to occasionally mediate when two students both want the same book. Some boys practically sprint to the library to pick up a copy when it is time to check out books. I hope there are plans to publish more books about Vera’s adventures! 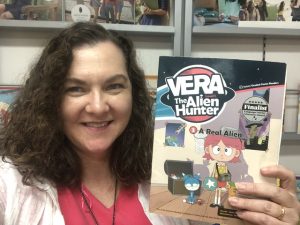